Unlocking the Gates: Playgrounds Open to Families in Spartanburg, S.C. 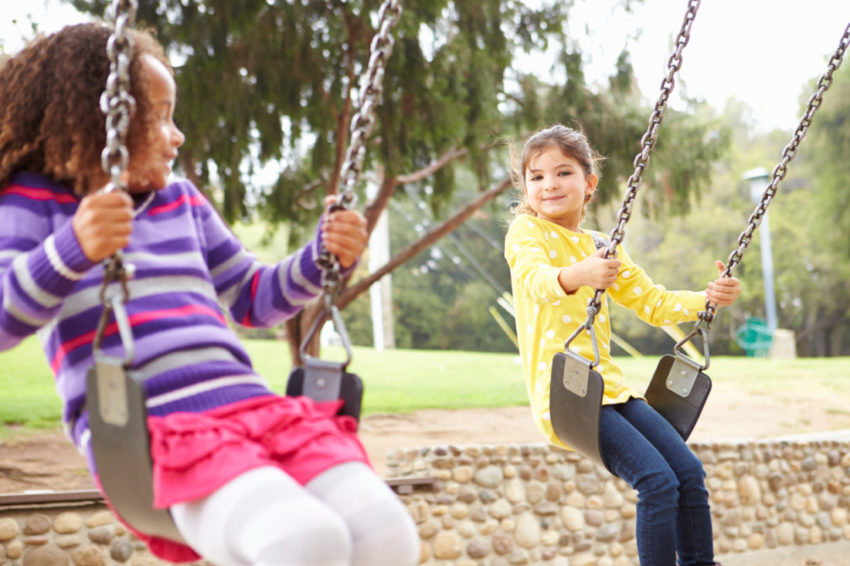 In communities where parks and land-space are limited, shared use agreements are providing more areas of recreation for children. Spartanburg, S.C., for example, has a growing Latino population but not enough active spaces. Although the idea of sharing space in Spartanburg had existed for some time, formalizing shared use agreements between the City and two school districts—Spartanburg County School District 6 and Spartanburg County School District 7—took about two years. Thanks to the collaboration of the city’s Parks and Recreation Department, the two school districts, and various community organizations, Spartanburg now has a shared use policy that keeps 10 school playgrounds open to the community during non-school hours.

Awareness: Since the late 1990s, members of the nonprofit agency Partners for Active Living (PAL), formerly known as Heartwise, have strived to bring healthy changes to Spartanburg—a city with a small but growing Latino population.

In the past PAL worked on finding ways to reduce the city’s high rates of cardiovascular disease. More recently, in 2008, members of PAL and local community organizations attended a Leadership for Healthy Communities workshop in Spartanburg, which led to the development of a local childhood obesity task force. The taskforce was comprised of city officials, educators, and community groups.

Among its first actions, the taskforce conducted a Spartanburg community assessment and found that 34.4% of children ages 6-11 were overweight or obese. This is when members of PAL decided to team up with members of the Hub City Farmers’ Market and the Spartanburg Childhood Obesity Taskforce, to apply for a $360,000 grant from the Robert Wood Johnson Foundation (RWJF) as part of the Healthy Kids, Healthy Communities initiative.

Learn: Ringo, executive director of PAL, thought of ways to reduce high local obesity rates. She had already heard of shared use agreements, which typically allow two entities to enter into a partnership and describes terms that allow school property to be used by the public during non-school hours.

“One of the national best practices that has emerged are shared use agreements,” Ringo said.

So she and a member from the city’s health department decided to contact the city’s community services director who oversees the Parks and Recreation Department.

Ringo learned that the city already had shared use agreements which allowed District 7 schools to use one of the city’s old baseball stadiums.

But there were no agreements that allowed school district facilities to remain open to the public.

“So this [the shared use agreement] seemed like the next step logical step, to open some of the facilities to the general public,” Ringo said.

Frame Issue: Although the city’s Parks and Recreation Department had worked with school districts in the past, they were initially not too sure about entering into formal shared use agreements.

Ringo turned to former PAL board member Rene Cariveau, who was a City Council member whose area covered District 6 schools.

“She was one of our council members who was very passionate about child health,” Ringo said. “She was the one who really got excited about it [shared use agreements] and was willing to champion the initiative.”

According to Ringo, Cariveau wanted all of the elementary schools in her area to open their facilities to the public during after-school hours.

So, Ringo and Cariveau decided to try to meet with both superintendents from school districts 6 and 7. Ringo said they felt that, by bringing in both leaders, they would be more willing to develop and consider a shared use agreement with the city. Education: To make a case for more active spaces and how a shared use agreement might help, the PAL task force examined online resources from Changelab Solutions.

“They have so much information. They have a bunch of sample agreements already outlined, so that was really helpful for us, to use that information,” Ringo said.

The team studied Changelab’s Fifty-State Scan of Laws Addressing Community Use of Schools and found out about the statutes in South Carolina that permit the shared use of school facilities. They also studied the liability risks that might exist for schools in South Carolina.

Here’s what they found:

Mobilization: Cariveau took charge and arranged a meeting for key stakeholders: herself, PAL task force leaders, a representative from the Spartanburg Parks and Recreation Department, and the two superintendents.

At the initial meeting, the PAL team described information they had collected on shared use agreements and how the school districts could play a role in providing the community with safe places to participate in physical activity.

Dr. Thomas White, assistant superintendent for the Spartanburg District 7 school district said, “we talked about the goals as far as the city was concerned and how it would be mutually beneficial for us. We were all on the same page.”

Debate: Both superintendents thought that a shared use agreement was a good idea.

However, both still had concerns.

“There was some hesitation because of the concern of liability and the need to figure out all of the details, and who handled what, and how things were channeled if there was an issue,” Ringo said.”

The school district was also concerned about how maintenance responsibilities would be shared.

Still, the two superintendents agreed to continue the discussion and process of developing a shared use agreement.

Activation: Additional meetings were scheduled to discuss what terms would be included in the shared use agreement.

“We started brainstorming about the partnership and some of the terms, which schools would be open, how we would handle vandalism, who would lock up the gate at the end of the day, and who was responsible from a liability standpoint,” Dr. White said.

Several of the key stakeholders who helped plan the shared use agreement were also parents of children attending schools in Spartanburg. So as advocates, they also had their say during the decision making process.

It also helped that the school district had previously been involved in partnerships.

“Probably Duncan Park, a former minor league baseball stadium was the catalyst,” said Dr. White, speaking of the city-owned stadium that is used by Spartanburg district 7 athletic teams. “This whole idea of partnerships is not really new to us…we try not to duplicate facilities.”

The agreement stated that school soccer fields, basketball courts, trails, playgrounds, and football fields would remain open to the community. Each school playground would be open on weekends and from 9 a.m. to 6 p.m. on non-school days and after school until 6 p.m. on school days.

City lawyers then reviewed and reworked some of the policy’s language, and the school districts’ lawyers also reviewed the agreement.

Ringo said the process took a little longer than planned due to the legal reviews.

Change: About a year into the process the school districts and city leaders both signed the shared use agreement. The agreement was just the second of its kind in the state, according to city leaders.

The agreement spelled out these terms: In exchange for opening the school districts’ playgrounds to the public, the city’s Parks and Recreation Department will develop and implement programming and supervise use at the playgrounds.

The agreement, which included an automatic renewal every five years if things go as planned, was signed in 2012—about a year before it was actually implemented.

Implementation: Meetings were held on a monthly basis to determine a plan for implementation. Organizers gathered at these meetings to learn what their role would be on this project.

To kick-off usage of the school playgrounds, a community play day was hosted on April 20, 2013 at all the newly opened playgrounds. Schools sent flyers home with students and postcards were sent to all residents within a half-mile of each playground.

The city also developed a press release to let the community know about the changes.

From 11 a.m. to 1 p.m. on April 20, 2013, city parks officials conducted scavenger hunts, games, arts and crafts, and other activities for families. Healthy snacks like fruit and water were provided to children.
After implementation, 10 school facilities are now open to the community:

Equity: Now that the District 6 and 7 schools have unlocked their recreational facility gates, Ringo hopes that other schools will follow suit.

“We’re hoping that we see great success with these shared use agreements and then we can roll out these agreements to the rest of Spartanburg County,” Ringo said.

An expansion also would greatly benefit Latino children who tend to live in the outskirts of the City of Spartanburg.

Recently, the Spartanburg Childhood Obesity Taskforce published a report which found that Latino children living in Spartanburg County have a higher risk for being overweight or obese than any other group.

This Good for You Spartanburg 2012-2013 report takes a look at the Body Mass index (BMI) of 1st, 3rd, and 5th graders in Spartanburg. In all three grade levels, Latino children were more likely to be overweight or obese than other groups. As seen here, more than 55% of Latino 5th graders were obese or overweight.

Sustainability: To promote the continued usage of school playgrounds, the parks and recreation department will offer regularly scheduled programming at each site.

To keep shared use agreements with school districts 6 and 7 in place, the PAL team will track the usage of playgrounds.

“We will be working with an evaluator over the next year to look at the use of each facility during the shared use hours,” Ringo said.