The San Francisco district attorney’s office said it plans to enable prosecutors to make charging decisions in some criminal cases without knowing the race or background of the suspects and victims, a move aimed at reducing the potential for implicit bias in prosecutions, according to the L.A. Times.

This is great news for Latinos and minorities, who traditionally face negative stereotypes and police discrimination.

What is Implicit Bias?

This unconscious thinking is preconceived attitudes or stereotypes that affect our understanding, actions, and decisions.

Assumptions like these then influence your actions and judgments:

San Francisco (15.3% Latino) will use a software program engineered by Stanford University to eliminate references to race and other categorizing factors from cases presented by the San Francisco Police Department.

The program is set to start in early July 2019.

This comes after the Open Policing Project (OPP) found that police stopped and searched black and Latino drivers with less basis of evidence than used in stopping white drivers, who are searched less often but are more likely to be found with contraband items.

This will allow prosecutors to evaluate each case only “through the lens of the behavior that is being alleged, and whether or not that is criminal behavior,” District Attorney George Gascon told the L.A. Times.

Furthermore, the program will edit identities from a police description and substitute them with standard terms like “suspect” or “victim.” It will also erase references to the locations of crimes and the identities of arresting officers to prevent prosecutors from making assumptions — especially when determining offenses based on their geographic location.

“If you were in Los Angeles, and the crime occurred in Watts, and you use the word ‘Watts,’ you’d think the prosecutor is very likely going to assume the perpetrator is black or Latino,” Gascon said.

“I’m hoping that we can make this very easy for other agencies to use. I’d like to see this used across the country. We plan on making all our code available freely,” Goel told the L.A. Times.

“We’re hoping to mitigate the role of implicit bias in charging decisions, and hopefully that will lead to more equitable decisions for everyone.”

The program and review process does have some limitations. It cannot be used:

We know implicit biases are harmful and negatively set the long-term trajectory for many.

“Implicit and explicit racial bias undermines our criminal justice system at every step in the process. This innovative approach that Stanford appears to have designed might be a good first step for prosecutors to root out their own bias,” Eric Schweitzer, a defense attorney and vice president of the California Attorneys for Criminal Justice, told the LA Times.

The program—Police/Community Initiative on Trauma-Informed Responses to Violence—brings together police officers, community leaders, healthcare providers, and violence interrupters for honest conversations about trauma and violence.

They watch videos, work in teams, and have real discussions. They talk about how trauma impairs early childhood development and increases the risk for truancy, dropping out of high school, substance abuse, and other risky behaviors.

“We thought we knew it all – and that good policing was arresting the bad guys and being the warriors. Now we are listening. Now we understand that we are guardians of the community and we need to understand the root of the problem and be part of the solution,” said Newark Police Lt. Louis Forst, on the Equal Justice USA website.

Sadly, Latinos and other minorities have to worry about many different biases.

Learn more about them here:

“Everybody has biases, we know this from years and years of study. If you say I have no bias, you’re mistaken,” Schweitzer said. 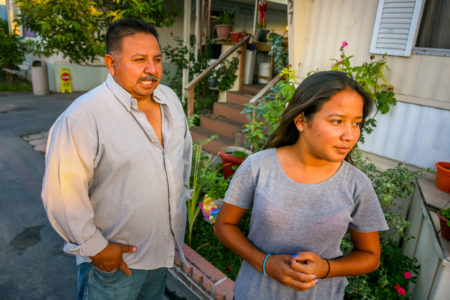