We at Salud America! are excited to honor all U.S. military personnel, including the Latinos, who have served our country.

Latinos in the Military: History

Latinos have a “proud and indeed enviable” record of military service that dates back to the Civil War, according to a U.S. Army historical website.

Latinos have received more than 40 Medals of Honor, according to the Department of Defense.

“Whether their heritage can be traced to Spain, Cuba, Puerto Rico, Mexico, or one of dozens of other Spanish-speaking countries or cultures, they’ve answered the ‘call to duty,’ defending America with unwavering valor and honor,” according to the website.

Latinos in the Military: Today 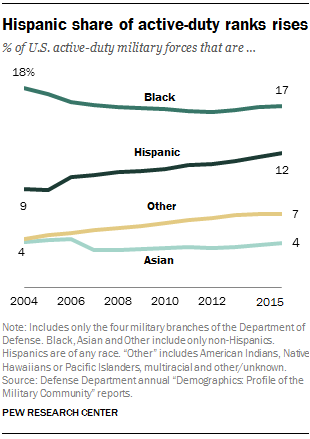 The percentage of Latinos in the military is on the rise.

The percentage of Latinos in military active duty rose from 4% in the 1980s to 12% in 2015, according to Pew Research Center.

Latinos in active duty rose again to 16% in 2017, according to a report done by the Congressional Service Review, and 17.2% in 2020, according to the U.S. Department of Defense.

One of these Latinos in military service is Alejandra Avila

Avila, a native of Monterrey, Mexico, is a Technical Sergeant with over nine years of service in the U.S. Air Force.

She connects with her heritage daily.

“Avila speaks Spanish in her courses at the Inter-American Air Forces Academy, which teaches military members stationed in Central and South America. She was recently promoted to become the executive officer for the academy’s commandant,” according to Share America.

“There has not been a time in my career where I am not learning something new,” Avila said.

“It was a tremendous honor receiving this award and being recognized by the American Legion Auxiliary,” said Salles. “It is a reminder to me that I am on the right track with what I am doing with my life, and it motivates me to keep on striving to higher levels of excellence.”

Salles, currently the NRC’s director of reserve officer accessions, has been drawn to a life of service from an early age.

“I have wanted to join the Navy since high school when I was a part of the NJROTC unit,” said Salles. “There, I was first exposed to the Navy and I knew this was the place where I could grow and thrive to the best of my abilities and have a rewarding experience.”

And a rewarding experience she has had indeed.

Salles has served in a variety of career fields from Public Affairs to Naval Flight Officer to her current field of Human Resources. Whatever community Salles was involved with, she credits the Navy for providing so many opportunities.

“The military has shaped me in ways I could never have imagined since I first joined in November of 2007,” said Salles. “I am so much more mature, wise and educated than I was 10 years ago. The Navy has sharpened me spiritually, physically and mentally by challenging me to be the best version of myself through everyday occurrences and opportunities. Every day in the military is an opportunity to do well for others and for one’s self.”

Salles has found that serving others provides a high level of self-satisfaction.

“One time I was running the PRT, and when I finished I noticed there were still several shipmates behind me who were still running,” said Salles.

“One girl in particular struggled with her run and I felt compelled to go back and run with her until she finished strong, even though I was super tired. I wanted to do what I could as her fellow shipmate to motivate her to press on to the best of her abilities. I felt a sense of duty and obligation to do what I could with what little I had left in me to help someone else. This is how I feel each time I serve others, whether it’s for a large project or something as small as helping someone off their feet.”

Doreen Gallagher, a long-time friend, nominated Salles for the award.

“Lt. Salles embodies the American Legion Auxiliary Mission Statement of ‘in the spirit of service, not self’ in her personal life and in her military career,” Gallagher said. “She showed her commitment to the local community by participating in local community service projects and being involved in her local church. I am absolutely thrilled that she won this award. It truly is an honor to know her personally. She is truly deserving of this award.”

Pvt. Marcelino Serna was an undocumented Mexican immigrant who joined the U.S. Army and fought in World War I.

He was the first Latino to attain the Distinguished Service Cross.

“[In 1918, Serna] stood out for single-handedly capturing 24 German soldiers after a German bullet had grazed his head,” according to the Army’s website. “Perhaps even more impressive, Serna prevented another American Soldier from summarily executing all the captives in the heat of the moment.”

Two weeks before he was due to return home, Viet Cong guerrillas captured Versace, on Oct. 29, 1963.

At age 27, he mounted four escape attempts. He ridiculed his interrogators, swore at them in three languages, and confounded them as best he could, according to two U.S. Soldiers captured with him, according to the Army’s website.

“The witnesses said the unbroken Versace sang ‘God Bless America’ at the top of his lungs the night before he was executed, Sept. 26, 1965. His remains have never been recovered,” according to the Army’s website. “Versace was posthumously awarded the Medal of Honor, July 8, 2002.”

Several high-ranking military officials have recently acknowledged the racism that affects soldiers from minority backgrounds and pledged to make better efforts to eradicate discrimination from the military.

You can take steps of your own to address systemic racism and discrimination.

The Action Pack will help you gain feedback from local social justice groups and advocates of color. It will also help you start a conversation with city leaders for a resolution to declare racism a public health issue and commit to real change. It will also help build local support.