Latinos Power the U.S. Economy to a Better Future 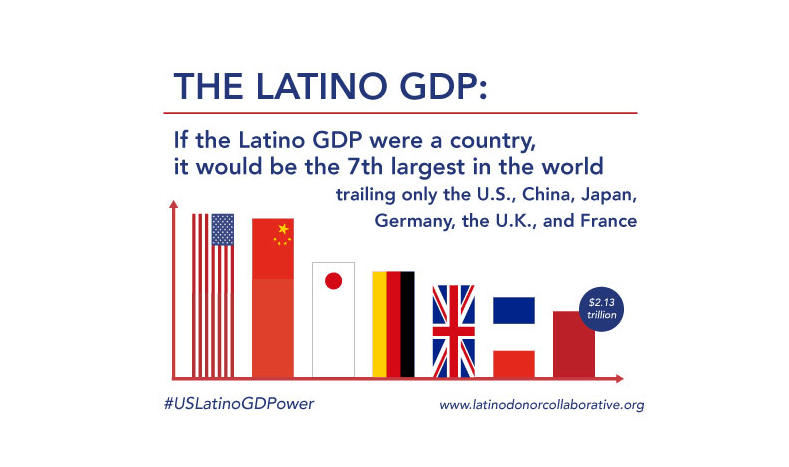 If U.S. Latinos were their own nation, they would have the world’s seventh-largest gross domestic product (GDP), at $2.13 trillion, according to a report by the Latino Donor Collaborative.

That is a higher GDP than India, Brazil, and Italy. This means American Latinos are driving growth of the U.S. workforce and economy. This is contrary to political and popular rhetoric about Latinos, which hurts Latinos.

The Latino GDP is growing 70% faster than the U.S. GDP.

“If these rates are sustained, Latinos will contribute nearly one quarter of all U.S. GDP growth between 2019 and 2020,” according to NGL Collective on the Latino Donor Collaborative report.

How Latinos Impact the Economy

By 2020, U.S. Latino purchasing power will top $1.7 trillion, according to the Selig Center for Economic Growth.

“We are excited to have statistical evidence that proves what Latinos living in the U.S. have always known to be true: we are a hard-working, productive, and essential part of American economic growth and American society,” Ana Valdez of the Hispanic Chamber of Commerce, told CNBC.

“Favorable demographics,” according to Jeff Humphreys of the Selig Center.

“The Hispanic population is growing much more rapidly than the total population, thanks to natural increases and strong immigration,” Humphreys said in a press release. “The population is also increasingly better educated and has increased its entrepreneurial activity.”

The population also is very young. with 35% younger than 18.

“This bodes well for increased economic prosperity in the future with proportionally more Hispanics either entering the workforce for the first time or advancing in their careers,” according to the Selig Center.

Bottom line, Latinos are growing in the U.S. workforce.

“The increase in Hispanic labor could contribute around 0.21 percentage points to annual real GDP growth in the United States over the next three decades if the Hispanic community catches up to the rest of the country in labor productivity,” according to a the Peterson Institution for International Economics, Forbes reported in February 2019.

“By 2025, the increase in employed Hispanic labor could contribute more to US GDP growth than non-Hispanic labor.” Another reason for Latino economic growth is entrepreneurship.

Thee are 4.37 million Latino-owned businesses in the U.S. They contribute more than $700 billion to the economy annually, according to the U.S. Hispanic Chamber of Commerce.

Latino entrepreneurs are starting companies 50 times faster than any other demographic group, according to Forbes press release.

In the last decade, U.S. Latinos launched 86% of all new businesses in the U.S.

Latino entrepreneurs also were instrumental in helping the U.S. recover from the most recent economic downturn by opening 581,000 new businesses between 2000 and 2010.

The average annual revenue of Latino-owned business jumped an impressive 26.5% during the past 12 months, to $327,189, according to Biz2Credit data.

Latinos already owned 12% of all U.S. enterprises in 2012, with annual revenues of $661 billion, according to a study conducted by the Stanford Graduate School of Business.

This forces us to rethink our expectations about who’s doing work, what kind of work they’re doing, and what skills they’ll need to succeed in this economy.

For example, to help Latino entrepreneurs gain traction, Jerry Porras of Stanford founded Latino Business Action Network. The nonprofit collaborates with Stanford on the Latino Entrepreneurship Initiative. The group “identifies Latino-owned companies that are primed to grow into firms making at least $1 million in revenue and puts them through a six-week intensive program,” CNN reports.

Why Economic Growth Matters for Latinos More than half of the those surveyed by Stanford said they were failing to grow due to inadequate funding. The researchers pointed to the lack of a pipeline between investors and Latino-owned businesses and a dearth of financial education, as well as cultural issues within the Latino community.

“The companies being created are subsistence-businesses. They’re not creating wealth for the owners,” Porras said.

Still, Latino-owned companies have grown 31.6% since 2012, more than double the growth rate of all businesses across America (13.8%), USHCC reports.

Despite these big gains, Latino and other minority youth have higher rates of poverty and greater gaps in education and health opportunity than their white peers, according to a recent report by County Health Rankings.

There is still a common misperception that non-U.S. citizen Latinos do not participate in the work force as much as other populations. In fact, male Latino non-citizens have an extremely high work force participation rate, over 90% for young mature workers ages 25-49.

Immigration Remains a Big Factor, Too

Immigrant workers are critical to the economy, too.

In Jackson, Wyoming, for example, attracting and supporting immigrants can help Wyoming achieve goals like economic diversification and retaining a young workforce, according to a University of Wyoming report.

In the Jackson region, immigrants make up:

“In line with national trends, immigrants have a higher labor force participation rate than their U.S.-born peers and a higher share of the population that is working age,” according to the report.

“I think the message is loud and clear that immigrants are not only here to stay but are going to help us meet those goals as a state,” report Noah Novogrodsky told Jackson Hole News & Guide.

Thus, policies for deportation of undocumented immigrants would hurt the economy, said Sol Trujillo, co-founder of the Latino Donor Collaborative.

“[It would mean] reducing the size of the workforce by 5% and leading to nearly $8 trillion in lost economic production over 14 years,” Trujillo wrote in the Wall Street Journal.

Trujillo had three big suggestions for capitalizing on the Latino factor for economic growth.

First, educate the next generation of American workers. Train them for the digital economy.

“Third, change the way we think—and talk—about Latinos in this country,” Trujillo said. “They are not only our neighbors, colleagues and friends; they are the foundation of what I call America’s New Mainstream Economy.”